Our winter travels have had an unforeseen bookend:  Montpellier.  We’ve always liked this town as I’ve mentioned many times; it’s been on our short list of places to live next.  But we’ve gotten stuck here twice in the last 4 months and I have to say, alright Montpellier, I get it, you win.

We first arrived in early December when the news of a transportation strike was swirling about and threatening our winter travel plans.  We decided to escape Paris before it started and come here so we would be within striking distance (so to speak) of Spain where we’d planned to winter.  (Did I just use winter as a verb?  How very snooty of me! But it sounds just as snooty to say spend the winter in Spain, despite the fact that for us it’s very much the equivalent of y’all fleeing to Texas or Florida.)  We thought we’d have plenty of opportunity to further explore this region and the other nearby towns that were also on that short list.  But then the strike solidified and we had to stay put.  We got a good, long look at Montpellier.  And we liked it, even more than before.  We met people, took painting classes, saw performances, and generally felt like we lived here, and could and would live here.  We had to scramble to leave at the end of the month when our train was cancelled due to the strike, a day late and a different route than planned.

Then while in Spain, our friends and former Paris next door neighbors Pat and Julie had a proposal for us:  would we be interested in time-sharing our Paris apartment?  We immediately said yes, it sounded like the perfect plan for all of us.  They would have a base in Paris again and we would have the ability to travel far and wide, while still having the fort minded,  which mostly involves having the mail picked up, a necessity in paper-oriented bureaucratic France. We then said no to Montpellier, at least for the near term; we would keep exploring.  During the months when Pat and Julie were in Paris, we would hang out in Nice! Toulouse! Lyon!  Because why not?  Montpellier and moving would wait. We would settle down later.

But the future has her own plans.  Here we are again, cooling our heels in Montpellier.  For my less avid readers, we thankfully dawdled a bit too long be-bopping our way home to Paris from Spain and got stuck here when the music stopped.  Thankfully, because we’re in a large apartment with a sanity-saving balcony and not in our 220 sq ft apartment during these quarantined days. To clarify:  we would legally be allowed to go home to Paris because it is our primary residence, despite the travel restrictions.  But we would not be allowed to leave again, and that is unthinkable under these circumstances.  So we’re stuck here by choice.  And now, good lord willing and the creek don’t rise, we’ll be moving to an apartment here May 1st with a 6 month lease.  It’s currently our friends Paul and Paula’s place, they’d arranged a new apartment some months ago.  It’s available, affordable, and we like it.  It has downsides, which is why they’re moving, but it’s not like we can go apartment hunting now.  It’s a bird in the hand, we’ll look for the one in the bush later.

With the confinement extended in France until at least mid May, and second and third viral waves all but certain, we really don’t want to risk getting stuck in our tiny flat in the most densely populated city in Europe.  The borders will likely be closed to non-residents until at least September, throwing Pat and Julie’s plans up in the air.  We’ll hang on to our Paris place for now, that flexibility due to the fact that we have kept our housing costs there well below budget.  How, when, and if we’ll eventually move the rest of our stuff remains an open question.

So kudos to you Montpellier, well-played!  You’ve won.  We’re yours. 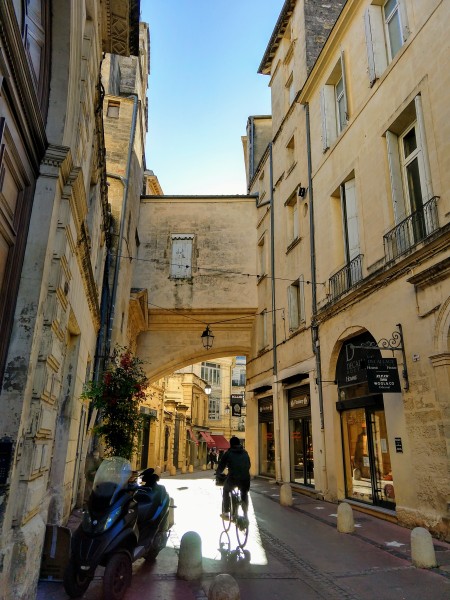 Cheers my friends! Hope all is a well as can be.