I love a good coincidence story.  Who doesn’t?  It makes you feel like there’s some overarching sense or theme to the universe; that you and yours are not mere random burps in the space-time continuum. (I also love words with 2 u’s in a row.  Why is it continu-um and not vacu-um?  But I digress.)  G.K. Chesterton called coincidences “spiritual puns”.  God’s dad jokes.  Jung had his concept of synchronicity, the idea that coincidences are connected by meaning and are not just, well, coincidences, which is more comforting as a human than the idea that it’s all random probabilities; that the occasional alignment of things and events is magical and not simply mathematically inevitable.  I’m going with Chesterton and Jung on this one, even if it’s delusional.  I need all the delusions I can get to get through the day these days.  Put meaningful coincidence on the list of 6 impossible things to believe before breakfast.

When we were here visiting Montpellier in December, Mark found a conversation partner through the bulletin board at the English language bookstore.  They met 4 or 5 times during that month.  When we came back in March they started up again.  Then confinement hit.  We changed apartments, moving here “accidentally” as I’ve already written about.  Mark called up Oliver when confinement was over and they started meeting again.  Turns out Oliver lives right across the street from us.  If we were paying attention, we could have seen him applauding for the health care workers on the balcony at 8pm.  So that’s pretty great, but that’s not the coincidence I’m talking about.  One day Mark was on his way out the door when I got a call on my French phone.  It was our friend Mark from Paris (who I will call M so as not to confuse you.)  Hey M, I said, let me call you back from another phone,  Mark needs to take this one so he can call his conversation partner.  I call M back and he says, you know, I now have a conversation partner from Montpellier, he contacted me through Conversation Exchange during confinement, name’s Oliver.  You guessed it; it’s the same guy!  I told my sister saying that it was more proof that the universe is a simulation and that the script writers are getting lazy.  She said it’s worse than that, the producers are broke and they can only afford to pay the same 5 actors!

Onward!  So as you know, this fine apartment we’re in that’s right across the street from Olivier used to belong to our friends Paul and Paula.  Last week they invited us to a birthday party for a friend of theirs.  (It wasn’t completely out of the blue, we’d met this friend when we were here in December.)  There we met a woman from Maryland who lives 3 doors down.  That’s a nice coincidence, she’s nice, it’s nice to know more neighbors.  We also met 2 women from Chicago, a mother and daughter, who, like us, packed up and left the city of broad shoulders for life in France.  Of course, we were comparing notes: Where did you live?  What ‘hood?  Where did you grow up?  Where did you land when you first came to Montpellier?  Wow, you used to live south of the train station, that’s where we live now!  Boulevard de Strasbourg?  Funny, that’s our street.  This keeps on going until we discover that they lived in this very apartment!  We took a picture of the 6 of us to send to our landlady. 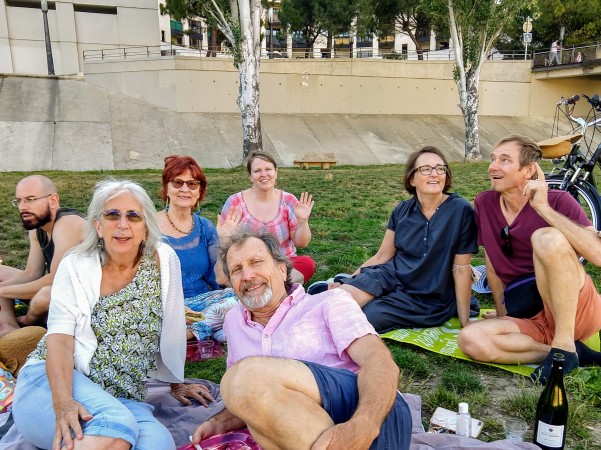 The boulevard de Strasbourg club.  The guy on the left will be moving here eventually, he just doesn’t know it yet.

You’ve got to take your meaning where you can find it.  For us, this confluence of events makes us feel like we’re meant to be here now.   May the stars align perfectly for you today!