I’ve sat down to write a couple of times lately, but what is there to say?  Nearly the only thing we’ve been doing these days is nipping up to Paris occasionally to cautiously enjoy the big city life in its new tourist-free iteration, and there’s no way to say that without sounding all hoity-toity,  highfalutin and generally insufferable.  See?  But I’ve had a couple of people ask me if we’ve fallen off the face of the earth so here I am.  But um, guys?  The world is round.  I mean, I think you all know that, but one can never be too sure these days.  I’ve even begun questioning whether or not there is even such a thing as a shared reality.  How else to explain the rampant insanity we’re seeing lately?  My new theory: ideas are viruses.  They’re contagious.  But they have to find susceptible terrain.  And there’s so much batshittery in the air these days, it’s going to find weakened hosts to take root in.  Question of numbers and dosage.  No one is as rational and logical as they think they are,  we’re a magical thinking species.  So with the lunacy of late going to a whole new level,  I’ll throw my hat in the ring.   Are conspiracy theorists living in an alternate reality that is overlapping ours, one in which everything they believe is in fact true?  I’m saying yes, and you’ll never convince me otherwise.

Our new reality: we’ve been poking our heads out of our covid shells and trying to resume a semi-normal life, but the amount of vigilance required can be exhausting.   We cast spells to assure our safety: hold your breath when passing through a group on the street.  Do a 180° if someone sneezes, even if they’re wearing a mask.  Flee the maskless plague rats. (Yes, we have them here too, but it’s the careless young, not weaponized conservatives.)  First train out, first class.  Control is a crapshoot, but it’s how we manage anxiety.

It wasn’t so long ago that travel was a real adventure, one where you risked your life and your fortune each and every time you ventured away from home.  Bandits and pirates and plague.  Oh my.  You didn’t go just to go and see what there was to see, or at least most people didn’t.  You went because you were summoned by the king, or the pope.  Or for your business interests.  Or you had a judgement against you and were sentenced to walk the pilgrimage route to Santiago de Compostelle while your creditors and enemies usurped your property.  Crusade anyone?

We recently threw no caution to the wind and went to see what there is to see in the town of Sète, which is only a 20 minute train ride from Montpellier. Sète has its origins in the 17th century, when it was created by royal edict to be the seaport for the Canal du Midi, which was an ambitious project connecting the Atlantic at Bordeaux to the Mediterranean.  Ships could go as far as Toulouse via the Garonne river; the Canal du Midi would take them the rest of the way to the Mediterranean, allowing ships to completely bypass the Iberian peninsula and the risks that involved, mainly pirates and inclement weather, not to mention avoiding taxes.  Some things never change.

We arrived early, all togged out for adventure. 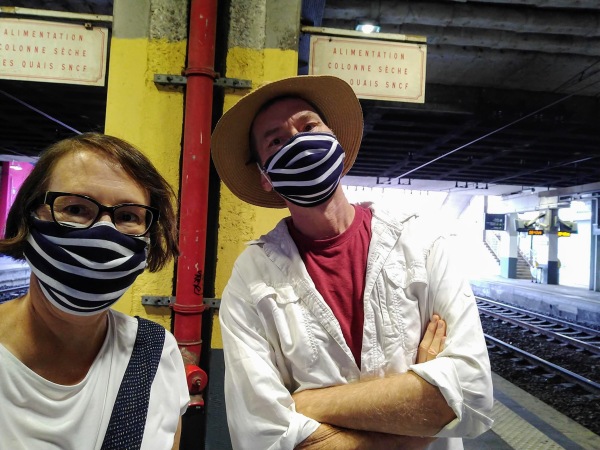 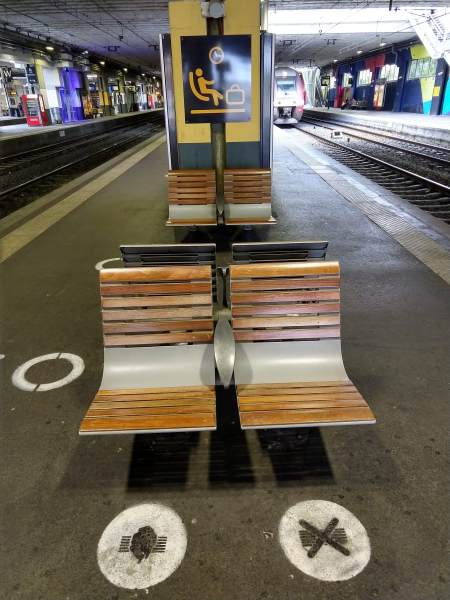 What the social-distancing heck is this supposed to represent?  Let’s take a closer look:

I got nothing.  You?

After the canal’s heyday went away, Sète became a fishing village, largely settled by Italians.  The canal now plays host to a summer boat jousting event, sadly canceled this year like so much else.

See the cell tower at the top of the hill?  That was our first destination.  Not the cell tower itself, but the odd little church of Notre Dame de la Salette nearby, which was originally a fort. 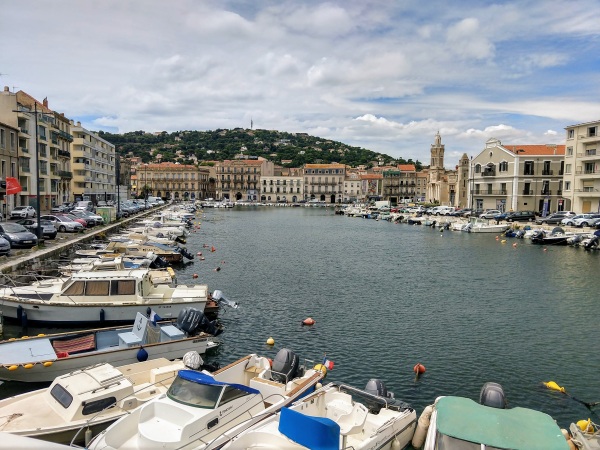 If we’d paused to consider the climb before committing ourselves, we probably would have taken the bus.  It was tough both coming and going.  Happily, Mark made the most fortunate language mistake in the history of his language mistakes (which are few and far between these days).  Before undertaking ascent we stopped in a pastry shop where we once had these delightful light and crispy apple tarts.  Mark ordered two and stuck them in his bag.  Halfway up the hill we completely ran out of steam.  Mark opened the bag and found he had in fact ordered two flan.  He was chagrined, I was delighted.  No mincing little pastries for us; we had giant slabs of eggs, cream, and sugar!  Fuel!

At the top, the view of the Étang de Thau, the canal’s terminus 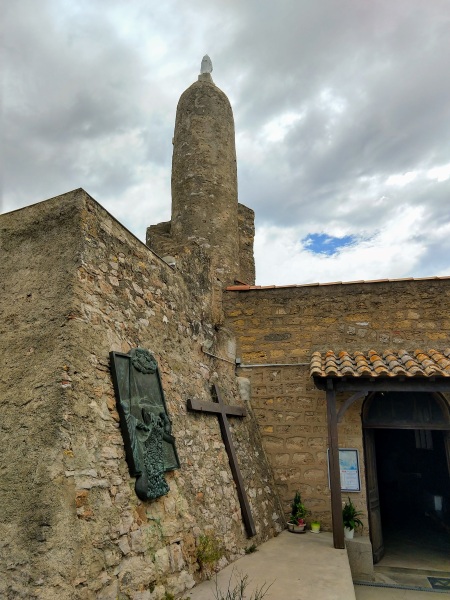 The  interior was painted in 1952 by a locally celebrated artist, Jacques Bringuier, while the rest of the walls are done by unknown naive artists.

Mountains that seem to have been painted with a wide, house-painting brush

The rest of the town is well worth a wander. 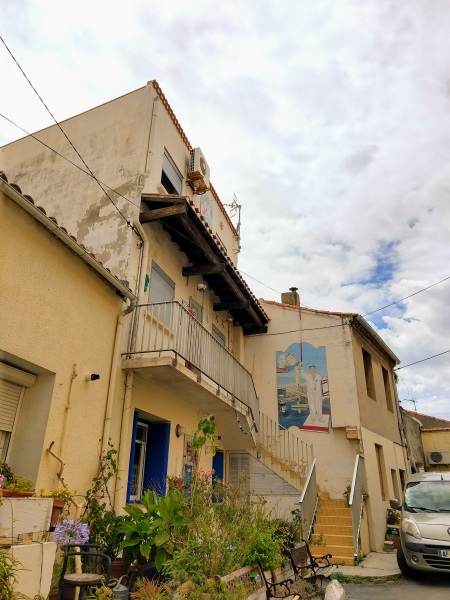 From a previous visit, when skies were blue: 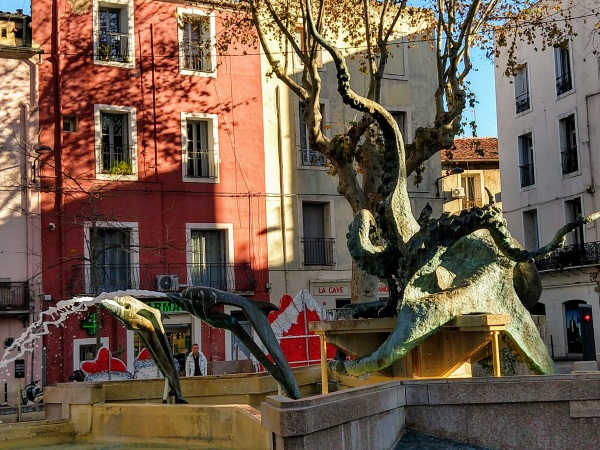 Octopi seem to be the town’s mascot.  Not just seen in sculpture and street art, they feature in the local delicacy, Tielle, which is sort of a bread-y, cheesy, octopus-y tart.   Ate one, it was fine.  Nothing to write home about, although I guess I just did.

On the downslope we went to a fine local art museum, Musée Paul Valéry, where we were nicely surprised by the exhibition, then it was time for lunch before fleeing the swelling afternoon clouds and crowds.

Next up: a quick jaunt back to Paris to renew our visas, and then covid-willing and the numbers don’t rise, we’ll be off to our happy place, Belle-Île-en-Mer in Brittany.