I’ll get to that, but before we get there, here’s how we got here.  In our last episode, we were in Bayonne, heading home to Paris to meet up with visiting friends.  That didn’t happen.  Our friends decided they needed to get back for a family event, and Mark and I decided we could use a bit more sun so we detoured back to Montpellier for a spell.  (This was pre-all virus hell breaking loose.) Yesterday we were due to go back to meet up with another friend who then got waylaid by the travel ban.  Remember how I said we wanted to live in Montpellier?  Careful what you wish for.   Since there’s nothing awaiting us in Paris right now, save a change of clothes, we’re going to park it in Montpellier for a while and ride out the uncertainty.  It’s less crowded, there’s sun, and we even have friends here now.  A couple of weeks ago said friends, Paul and Paula, and another friend, Debra invited us to go on a road trip to see some villages not far from here.  There would be picnicking of course, because France and because cheese.

First up: St. Guilhem-le-Désert, desert referring to fact it was deserted at the time, though the landscape is also quite arid. Guilhem was Charlemagne’s cousin and a military man who got religion and a piece of the “true” cross and set up camp in the hills for his holy retirement.   St. Guilhem is the launching site for lots of hiking trails and it is on the Camino de Santiago pilgrimage route.

The gorges of the Hérault

To get there you cross the devil’s bridge, or at any rate, a devil’s bridge.  We’ve run into several over the years, there are purportedly 49 in France alone.  The legend is so common that there are multiple categories of the tales in official folklore studies: deceiving the devil, devil’s contract, and master builder.  They are impressive feats of engineering, especially when you think about the constraints of building them in the middle ages.

The town itself is a wonder of medieval preservation.  The town and the bridge are UNESCO world heritage sites, but I flipped out when I saw the central town square.  In it is a tree that was featured in a documentary I saw about notable trees in France.  Just like the designation of Plus Beaux Villages (most beautiful villages) there is an official designation of remarkable trees.  It’s a plane tree planted in 1848, 65′ tall and 20′ around!

The other remarkable thing about St. Guilhem is this is where one of the cloisters of the museum The Cloisters in New York were acquired. The story isn’t a sleazy as William Randolph Hearst coming in and buying up castles and artifacts from impoverished towns.  The abbey was being looted after the revolution and a local guy bought the cloister and put it in storage. It was later bought and brought to New York where it is today. 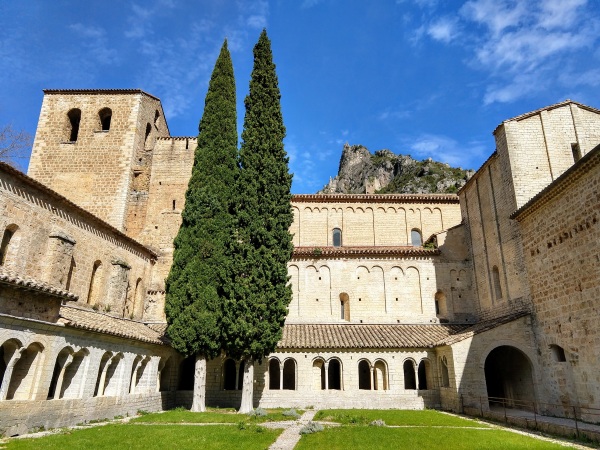 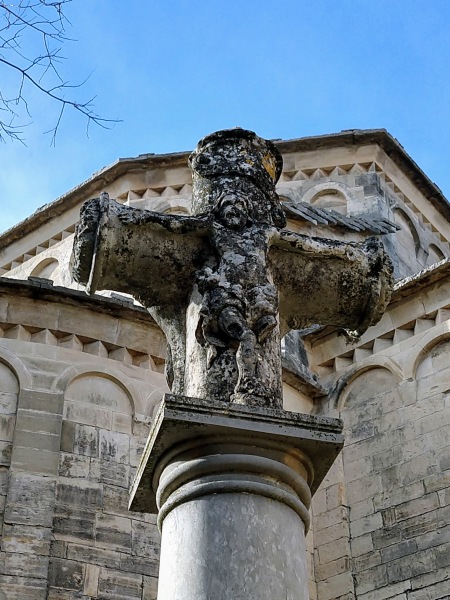 And then we ran into this guy:

The man turned out to be the town historian.  The sheep’s name is Blanchette, we never learned the man’s name.  He became our impromptu tour guide.  Blanchette was found in a field as a newborn by a passerby who passed her off to the man’s wife.  No herd or shepherd were ever found, so they kept her and raised her as a pet.  Blanchette used to sleep in their bed and as such is accustomed to things like stairs and furniture.  She sleeps on a kid’s bed on their porch.  She must be accustomed to his habit of stopping off to chat up the tourists as well, she began pawing (hoofing?) at his cane to let him know she was ready to move on.  But he wasn’t ready, he tied her off to a bench and regaled us with tales of the founding of the church (on a Celtic shrine site, as seems to always be the case) as a outpost of the abbey at St. Guilhem.  There’s nothing like a good dose of history to help you forget your troubles: plagues, famine, religious wars, sieges and escape tunnels. 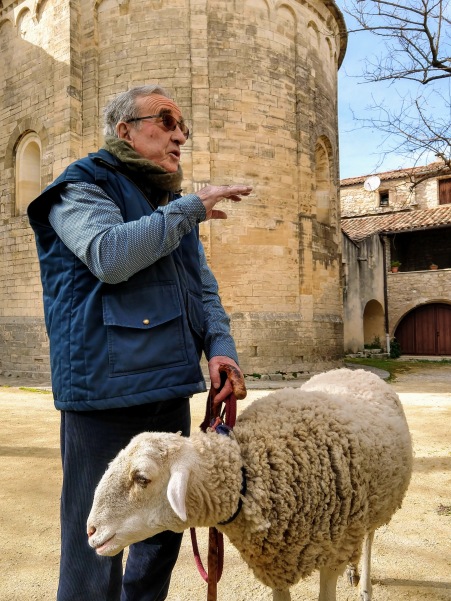 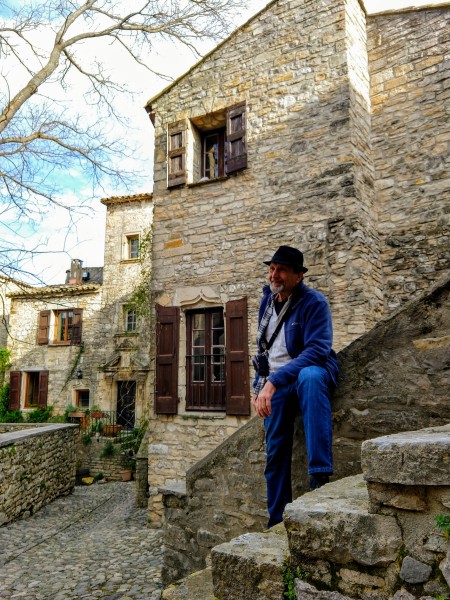 Paul, no doubt marveling at our travel luck, as was I.

Our guide wouldn’t accept any tip.  He said his fondest wish is to know what these symbols are from the interior and that someday someone will pass through town who will be able to tell him. Obviously something has been chipped away that may prevent it from ever being discovered. If you know, head straight for Saint-Martin-de-Londres.  Ask for Blanchette.